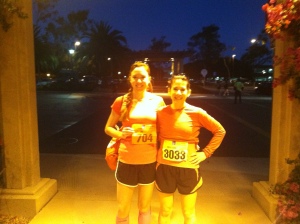 Running is an inherently selfish sport. We do it for us, whether that be for our physical health, our mental sanity, or just for our own enjoyment . I think most runners know this, and many even accept it. It’s not a bad thing, it just is what it is. But it’s come into play for me this week, as I struggle to accept my first DNF. Even though I know there are much bigger problems in the world then a failed marathon, I can’t help but feel sad about it. And then I feel bad about feeling sad, because it is such a minor thing in the grand scheme of things. So why doesn’t it feel that way?

I put in a decent amount of training for what was to be my marathon debut. Sure my training wasn’t perfect but it was overall good. I tapered right. I ate well. I had a plan for my pacing and race nutrition. I felt generally prepared and excited for it. I started to get nervous when I saw the weather forecast though. It was to be in the low to mid 80s the day of the race. I don’t like heat, and I certainly hadn’t been training in it. Mentally, this threw me for a loop. The morning of the race I felt more anxiety than excitement. Sure there was some excitement, but instead of my usual pre-race nerves (the kind that are actually helpful) there was a looming dread. Whether that was normal or an omen of what as to come I’m not sure. Did my pre race dread factor into my DNF? Who knows.

The race started off well enough. I started with the 3:55 pace group since my goal was to finish in under 4 hours. I felt good the first few miles and actually pulled a bit ahead of the pace group. I was going a bit faster than I had originally planned but it felt manageable. I wouldn’t say I felt good at any point in the beginning of the race, but I felt okay. Then around mile 6 or 7, as the heat began to sink in, I went from feeling okay to “meh”. By the half marathon check in I was struggling mentally with the heat and boredom but I was around 1:55 and still on target to break 4 hours. Somewhere in the next 3 miles things started going downhill fast. It got warmer and there wasn’t much shade (at least not comparatively for someone who likes to run in forests!). I continued to struggle mentally with not knowing the course or what to expect from the terrain. I felt incredibly bored and was questioning why I signed up for a road race. Around mile 16 to 17, two gels in, my stomach started to feel off. It wasn’t nauseated at first, but something was not right. Sick of not feeling well, after I crossed the mile 17 sign I started walking. The fact that I was walking morally defeated me and was the beginning of my true undoing. Although I had planned on just walking a bit, the next 3 miles turned out to be mostly walking. I tried to jog here and there but it made my stomach feel worse. I watched the pace groups pass me- 3:55, 4:00, 4:15. Soon even trying to jog felt pointless. I walked and contemplated how the heck things had fallen apart so badly. I had been prepared to push myself. Prepared to hurt. But not prepared to feel sick. And then, shortly after I passed the mile 20 sign, I started dry heaving. I pulled over to a patch of grass, sat down, and threw up. Luckily for me (but not them) I had gotten sick in front of a very nice group of spectators. They gave me a bottle of electrolyte drink, and a nearby race official called over the medics.   My vitals were fine and I actually felt a lot better after getting sick, but it didn’t seem like a good idea to try and continue, and frankly I didn’t want to. I was done. The very nice group of spectators gave me a ride to the finish where I met up with my friend who had done the half. She tried her best to console me by telling me how many times Paula Radcliffe and Kara Goucher have DNF’d, and it helped a bit. But when I called my family to tell them of my failure I was a mess. I felt as if I had let them down, in addition to myself. How could this happen? I can run a half marathon up a 14,000 foot peak with a decent time but I can’t finish a marathon at sea level?! I tend to pride myself on being a strong woman, both mentally and physically, but in that moment I felt weak. I felt dumb. And I felt sad. There was nothing left to do but cry.

I was pretty sad the rest of the day but with time, and maybe physical distance from the race venue, I feel better. Am I still bummed about how things turned out? Yes, but I think I’ve found acceptance. DNF’s suck, but basically every runner has one somewhere on their record. I’m hoping that months down the road I’ll look back at this as one of those situations that makes you stronger in the end.

And of course, there are always lessons to be learned. I’ve learned the importance of paying attention to electrolytes and hydration in the heat and humidity-which I already knew but for some reason did not apply. But mostly I’ve learned that I belong on the trails, not the road. I belong in the mountains, not on the beach. Will there be another marathon attempt in my future? I’m 99% sure there will be, but you can sure as heck bet it will be on the trails where I won’t be focused on time and pace…and I might even have fun!