If you are an endurance athlete of any kind you likely heard long ago about the use of chocolate milk as a post workout recovery beverage.  It started with a study that compared chocolate milk to typical sports drinks, such as Gatorade, and found that chocolate milk was superior for recovery.  Ever since many cyclists have touted it as the “perfect” post workout beverage and magazine ads and commercials promoting chocolate milk are everywhere.

So what’s the big deal?  First of all it’s important to understand the concept of a recovery beverage and why and when it is necessary.  Here is the simple version:

When we exercise we burn a mix of fat and carbohydrate.   Lower intensity exercise burns mostly fat, which even the leanest athlete has plenty of stored up.  Higher intensity exercise burns mostly carbohydrate, which the body can only store so much of (in the form of glycogen).  On average, a person will burn through all of their body’s glycogen stores during 2-3 hours of exercise.  That’s why endurance athletes have to consume a carbohydrate source of some kind to keep going during activities of that duration or longer.  That is also why it is important to consume carbohydrates as soon as possible (ideally within 30 minutes) after strenuous exercise-in order to replenish your body’s glycogen stores.  It is also recommended to consume some protein post workout to aid in muscle recovery.  Fail to do so and your next workout will probably suck.   So why would chocolate milk be superior?  First of all, it is a good source of carbohydrate.  It is also a good source of protein, and it specifically contains a good amount of the branch chain amino acids (leucine, isoleucine, and valine) which are particularly important for recovery from exercise.  Another benefit of chocolate milk is that it is a liquid. A lot of athletes suffer from GI distress or suppressed appetite after workouts and have a hard time eating solid foods during that all important recovery window 30-60 minutes post exercise.  Liquids are often more easily tolerated for these athletes.  Bonus: it’s super affordable.  Sports nutrition supplements can get pricey.  A whole gallon of chocolate milk will only set you back 4 bucks.

That being said, not everyone needs to be concerned about a post workout recovery beverage (or meal).  If your workout is 1 hour or less and at a moderate intensity you don’t need to worry much about post workout recovery nutrition.   Your next meal or snack, as long as it is well balanced, should provide adequate carbohydrate and protein for your body to recover.  Be particularly careful if your workout is sub 1 hour and your goal is weight loss. An 8 oz serving of lowfat chocolate milk still packs in 200 calories.  This is why it annoys me to see personal trainers at the gym pushing hefty protein shakes on overweight women who are likely doing less than an hour of exercise-they don’t need it and it might actually contribute to weight gain- probably the exact opposite these women are at the gym for!

So what’s my final verdict? Although I don’t personally use it, I think chocolate milk is a quality post workout beverage (for those who actually need it, see above).  It’s a good source of the nutrients you need post workout, it’s easy to digest, it’s cost effective, and it tastes pretty good (I think).  I’m actually not sure why I don’t use it! Maybe I’ll start.   However, chocolate milk is by no means the only post workout beverage and I don’t believe that it is necessarily superior to some of the other options out there.  So if you dislike the flavor there is no need to choke it down.  There are plenty of other ways to get in the nutrients you need after a workout.  If you don’t know what those are-speak to a sports RD like me!

So how does chocolate milk add up?

Chocolate Milk (based on 8 oz low-fat, numbers will vary slightly by brand)

It has been a more tiring than usual week.  Sure, it’s busy at work but that is nothing new.  And it’s ridiculously hot out- that doesn’t help.  But I think I am suffering a bit from Post Epic Event Let Down (PEELD).  When you’ve spent so much time training hard for an event and thinking about it non-stop there is a bit of a void afterwards.   The more epic the event, the harder it is.  Which is probably why my post Mt Evans Ascent week has been so blah.  Yes, my friends, it’s hard to come down from a 14,000 foot high.  Typically, the only solution is to get the next great adventure on the calendar.  Which I have done.  I’ve also done a lot of resting and a bit of beer drinking.  So since I don’t have the energy to write an actual informative blog this week, I figured out how to create a poll! What’s your strategy?

As I was driving home from a training run on Mt Evans last weekend, sitting in I-70 traffic, I started thinking about how the words “awesome” and “awful”, although fairly opposite by definition,  sound pretty similar.   I’m guessing they both come from the same root word-“awe”, which according to a quick Google search is defined as “a feeling of reverential respect mixed with fear or wonder”.  Yup, that about sums up how I feel about Mt Evans.   I’m betting that the Mt Evan’s Ascent will be a roller coaster that is both awesome and awful, possibly at the same time, and hopefully ultimately worth the battle.

I am at that weird place in training right before a race where there is really nothing you can do but sit back, relax, eat right, and hope that you’ve done the appropriate training to reach your goals. It’s sorta like that last hour before a big test.   There is typically a fair amount of freaking out during this time, but cramming won’t help, and might actually hurt you.   But there actually is something I can be doing: visualizing a successful race.  I once heard about a study that had basketball players practice visualizing themselves shooting the perfect free-throw over and over again.  They never actually touched a basketball, but their shooting average went up (sorry if that is incorrect basketball terminology).  So just by merely imaging yourself performing your particular sport with perfection, you may actually improve your performance.  The theory was that, if you do it right, you can “trick” (or teach if you are a glass half full kind of person) your brain into thinking you’ve physically practiced a bunch of free throws, and new neural pathways can be created, because your brain basically doesn’t know the difference between doing a free throw in real life and only imaging you are doing one (again you can choose to think of this as awesome that the brain is this powerful, or awful that the brain is this stupid!)  Think of it as an imaginary dress rehearsal.   It’s pretty cool stuff.

I’ve seen visualization mentioned in many other articles, so I figure it’s worth a shot.  I’m not talking cheesy “The Secret” type stuff, just simply picturing myself running up the course, feeling strong and fast, pumping my arms and breathing steadily….I’m feeling better about it already!

And even if it doesn’t help, it’s unlikely to hurt me (note to self: do not visualize self tripping and falling!)  If nothing else, doing it may help build confidence in my abilities and distract me from all of my nervous thoughts about what may go wrong during the race.

So time to sit back, eat carbs, and visualize success!

For info regarding visualization or “mental imagery”: 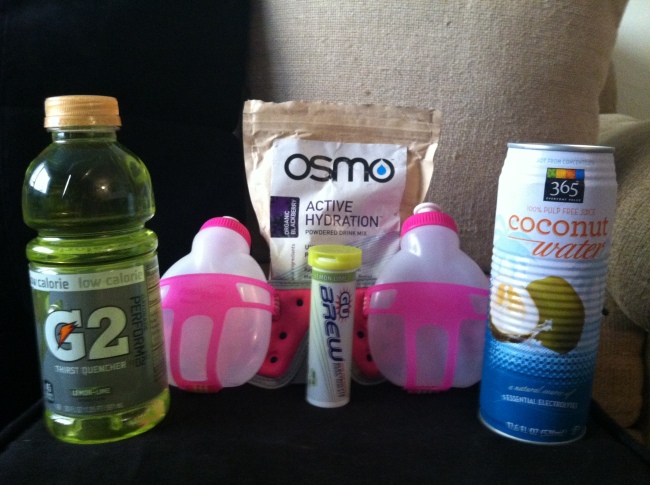 You would think that hydration requirements would be pretty straight forward.  Your body needs water, so it’s good for you right?  Well, yes, and it’s not that simple.  While sports dietitians have long known about the dangers of hyponatremia (low blood sodium levels) due to drinking too much water, they don’t always agree on how much water you need when exercising, what the optimal carbohydrate concentration in a sports drinks is (not to mention when to start using one), if coconut water is a superior hydrator, or even when and how much electrolytes to include.

I myself am in the process of trying to figure out my hydration strategy for my next race, the Mt Evans Ascent.  Being at altitude means I’ll have increased fluid needs from increased respiration, both from being at altitude and because I will be running uphill.  However, if I drink too much water I may experience that uncomfortable sloshing feeling.  Also, if I drink too many carbs I run the risk of GI distress, particularly stomach cramps and nausea, something that has on occasion been an issue for me. Below are some general hydration tips, and how I’m planning to implement, or ignore, them.  The bottom line is that it’s important to personalize your own nutrition and hydration strategies and to practice them before race day!

My plan:  For the Mt Evans Ascent I plan on wearing a small water belt that contains two 8 oz bottles.  I’m thinking in one bottle I will have plain water and in the other I will put a half tab of Gu Brew electrolyte tabs (1 tab has 10 calories, 1 gram of carbohydrate, 320 mg Sodium, 55 mg Potassium), but I may decide to do electrolyte in both (game time decision!). I plan on bringing 2 more tabs to use to refill the bottle, ½ tab at a time.  I plan on using gels for carbohydrates instead of a sports drink. Since I’ll be running close to 3 hours, I will need anywhere from 54-144 oz of fluids during the race.  Sadly, I have not calculated my own sweat rate (note to self: calculate sweat rate), so I’ll have to estimate. My goal is to drink both of the water bottles (so 16 oz) per hour, which is a little under the general recommendations, but I want to avoid that sloshing feeling.  Especially since I also worry a lot about drinking too much during the race and having to stop at the bathroom!  If it’s cold I may have a hard time with even 16 oz per hour.  Since I tend to drink on the mid-lower side of water requirements, I make sure to really focus on proper hydration after!

For an interesting read on Osmo and hydration:

More interesting info (if you’re a sports nutrition nerd that is):

Disclaimer: I have no relationship with any of the above mentioned products