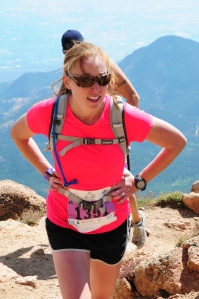 Suffering through the final mile of the 2013 Pikes Peak Ascent

I am in a daily plank competition, and it’s really starting to hurt.  It started at 4 minutes and now it’s up to 22, and it just keeps hurting more every week.  I’m not even sure how I’m doing it frankly, as there have been so many days I wanted to quit. I won’t go into the details of the competition, because that’s not the point of this blog.  What I’ve been wondering is if all this painful planking is making me mentally stronger (I know it is physically!)  To be a successful athlete, you have to be able to deal with a certain amount of pain.  I know that I’ve had experiences that taught me just what level of pain I can really handle.  For instance, when I went to France and rode my bike around the French Alps on some of the classic Tour de France climbs.  There were hills that were so steep that, by looking at them, I didn’t think I could physically pedal up them without tipping over.  But I dug deep and I did it, and in the process I learned just how much my body could hurt and still not blow up- literally.  I also think that I made some breakthroughs in my ability to handle pain during races this past summer.  It was mostly mental adjustments that I made- accepting it would hurt, and finding a way to deal with it such as reminding myself of my goal or why I was doing the race.  You’ve probably heard that when it comes to exercise your mind will give out long before your muscles.  It’s so true…but what to do about that?!

But, even more importantly, can you train to improve your pain tolerance?  I think that you can, both mentally and physically.

I once read an interesting article in Outside magazine (see link at bottom) about pain tolerance.  The article stated that researchers found people who had experienced more physical pain in their lives (like from injuries or childbirth) had a higher pain tolerance than those who didn’t.  One of the ways they discovered this was by having study participants stick their hand in freezing cold water for as long as possible. Those who had more past physical pain tended to be able to keep their hand submerged longer.   To me, that means that training your pain tolerance for exercise is quite possible.  So aside from sticking your hand in frozen water, how can you increase your pain tolerance for exercise?

I did some online sleuthing and also spoke to my sister Kim, who regularly sticks her feet in a bath of freezing cold water after training runs, and here’s what I found out.

*Side note: it’s important to clarify that we are talking about mental pain during exercise and the pain from exhaustion/pushing yourself hard and NOT about the pain from injury, which you should not push through!

To read the Outside article: